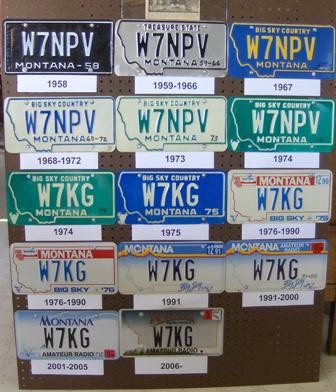 The first organized effort to get call-letter license plates for "Ham" radio operators in Montana began in 1956 following several discussions on the Montana Phone Net.  A committee was formed and submitted a bill to the Legislature.  A lot of effort and money was spent in gathering support for the bill which was passed by the Legislature and signed into law by Governor Hugo Aronson on February 7, 1957. The law set a fee of $5.00 and provided only a single plate which was to be mounted above (and not covering) an existing numeral plate on the vehicle.

It then became necessary for the State to purchase a set of license plate dies for all of the LETTERS of the alphabet.  The State previously had all of the numerals but only a few letters with which to abbreviate state agencies.

It was too late for issuance of the plates in 1957 so the first ones to come out were for 1958.  The 1958 plate was made of steel and stamped "Prison Made" but subsequent plates have been made of aluminum and are no longer stamped "Prison Made".  It was up to the "Ham" whether to display the plate on the front or the rear of his/her vehicle.  At that time in Montana history, license plates were issued to the vehicle and went with it when it was sold or transferred.  Upon sale or transfer, the "Ham" plate was to be removed.

Now that the committee had its foot in the door, it began pressuring the Legislature to amend the law to provide TWO call-letter plates.  Success came February 27, 1959 and now there was a plate for each end of the vehicle but the plates still had to be mounted above (and not covering) the regular plates.

The committee, and others, pressured the Legislature into making a further change to the law so that LICENSE  PLATES  WERE  ISSUED  TO  THE  INDIVIDUAL  INSTEAD  OF  THE  VEHICLE.  This eliminated the need for an extra set of numeral plates so "Hams" only needed to display their call-letter plates and take them with them when selling their vehicle.

All of the efforts by the committee were only able to accomplish small steps at a time but did pave the way for other organizations and for "Vanity" plates that came later.  Fees for call-letter plates have remained at $5.00 for each time new plates are issued and are valid from January 1 to December 31 even though the FCC License might expire on a different anniversary date.

Everyone holding a "Ham" radio license and who owns a vehicle should be proud to display his or her call letters on their license plates.  As long as there is justification through public service, it is hoped that the plates and the low fee will remain available.